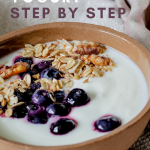 I can’t believe it took me this long to start making homemade yogurt. It’s so much easier than I expected it to be. It’s also much cheaper and in my opinion, more delicious than any store bought yogurt. Making this easy Instant Pot yogurt has quickly become one of my favourite weekly rituals. I get comfort in knowing that my fridge is full of yogurt that I can use for breakfasts, baking, quick sauces, dips, spreads, and a whole lot more. I even started using yogurt in place of butter and milk for mashed potatoes!

How long does it take?

As easy as homemade Instant Pot yogurt is, there is a bit of a timeline involved, so some planning is needed. Heating and cooling the milk takes a good 2.5 hours, after which it spends 8.5 hours incubating (cooking). I usually start the process around 8pm so it’s ready when I wake up in the morning.

What equipment do you need?

This method requires an Instant Pot or other brand of electric pressure cooker with a yogurt setting. I know it’s also possible to make yogurt in the oven or a crock pot. These methods might even be just as easy! But this method is the one I use and it’s crazy reliable, so I’m sticking with it for now!

The only other piece of equipment you need is an instant-read thermometer so you don’t overheat or over-cool your milk. If you don’t already have one, they are certainly a worthwhile investment. My ThermoPop digital thermometer was worth every penny. (There’s that affiliate link I told you about! If you use my link, I get a little cut.)

What ingredients do you need?

The only other ingredient you’ll need is some starter yogurt. This contains the bacteria needed to turn your milk into yogurt. If this is your first batch, you’ll need to buy some store-bought yogurt to kick things off. Look for a full-fat, Balkan-style plain yogurt with no gelatin or other weird additives. When you get into the rhythm of making yogurt, you can reserve a small amount from each batch to start the next.

The ratio I use is: One gallon of milk to 1/4 cup of starter yogurt..

How do you make it?

The part of the yogurt-making process that held me back for so long, was the initial heating and cooling of the milk. I’m a fairly impatient person, and I’m also a fairly uncalculated person.

Also, the temperatures are only ballparks. I’ve definitely overheated and over-cooled the milk on several occasions and it has always worked out pretty well.

I like to heat my milk on the stovetop in a normal pot rather than in the Instant Pot. This is because I find that no matter how careful I am, a brown crust always forms on the bottom of the pot. Instead of fighting this fate, I just let it happen, then transfer the milk to the Instant Pot afterwards–being careful not to scrape the bottom.

This also means I can crank the stove up to full blast and get the heating process over with faster. This part of the process usually takes about 15 minutes on my stovetop. The minimum temp you should be looking for is 180 degrees, but I usually take it to 200. Just keep an eye on the pot so it doesn’t boil over.

Once heated, I let my milk cool for about 2 hours on a tea towel-lined cooling rack (mostly just so it doesn’t slide around). You can expedite this process by setting the pot in an ice water bath in your sink, or by putting it in a cool,safe area. I tend to just walk away and let time do its thing.

Once cooled to 100-ish degrees, it’s time to dump your milk into the inner pot of your pressure cooker, whisk in your yogurt starter, set the timer for 8.5 hours, smash that yogurt button, and go to bed.

When your yogurt is ready, you’ve got some options. You can enjoy it as it is, which is my usual choice, or you can stir in some jam or maple syrup to sweeten it up.

Add a bit of salt and lemon zest and you’ve got an amazing drizzly sauce for my Green Pea Fritters.

Toss in some squeezed out cucumber, garlic, walnuts and fresh dill, and you’ve got a delicious Tzatziki-style dip. (The walnuts turn it into snejanka–tzatziki’s Bulgarian cousin.) You can see this one in action in my Mediterranean Dinner Party episode.

If you are a fan of plain Greek yogurt, you can rig up a wooden spoon tea-towel contraption to strain out some of the whey and thicken it up.

You can also strain it longer–to the point where it becomes yogurt cheese (or Labneh). I use this instead of store-bought cream cheese for spreading on crackers, dipping with veggies, or using on sandwiches.

*Whenever you strain or press yogurt, you will end up with a lot of whey as a bi-product (the watery stuff that comes out). This stuff is great for using in smoothies, or for replacing some of the water in bread baking. Don’t throw it out if you can help it!

I hope you give my Instant Pot yogurt recipe a try! Let me know if this becomes part of your new weekly or bi-weekly ritual by tagging me on Instagram @howtomakedinner.

Easy Instant Pot Yogurt | So much better than store-bought

This is the easiest method I’ve come up with for turning milk into yogurt using my trusty Instant Pot. The yogurt is creamy and tangy and I use it in so many things!