I am such a big fan of anything corn.

I remember trying many corn muffin recipes when I was younger, but I had issues with the batter kind of separating and not coming together. Some recipes instructed me to let the cornmeal sit in the milk for awhile to absorb it, but it never really worked that well.

And then I came across this recipe from Cooks Illustrated. It works so well because you start by cooking half of the cornmeal in the milk, stirring at various increments until the mixture reaches a pancake batter-like consistency.

Then you’ve got this smooth textured base that the rest of the batter kind of wraps itself around. It works great!

These cornbread muffins (or cornbread, you can easily make this in a brownie tin instead) come out moist, tender, not to sweet, and with nice domed tops. 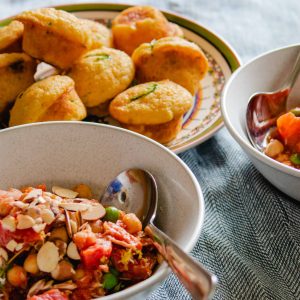 Before you go, I’d also like to give a shout out to ANOTHER really freaking delicious cornbread recipe.

This next one came from a book that I read as a teenager called “A Day At The Beach.” It was a nice little summer novel about a couple who moves to the Caribbean and opens a restaurant.

It was such a cool book because in amongst the storytelling there were some nice little recipes. One of the recipes was this really cool cornbread.

I loved the sounds of this cornbread recipe for a number of reasons. Mainly because it had CREAMED CORN in it. When I think of creamed corn, my mind immediately assumes sweet and moist. This is what we want to find in cornbread!

So I wrote the recipe down, made it, loved it, and eventually lost the recipe. In the 90s, losing a written down recipe was a much bigger deal than it is now. I couldn’t just Google it. I had to go to the library to find the book, then rifle through the pages until I found it. This library quest happened a few times before the internet came along and made everything searchable.

This cornbread recipe became my go-to for years. I love making it when I’m in the mood for a sweeter cornbread with more stuff in it. My primary reason for including this cornbread recipe in this post is so I always know where to find it. No more trips to the library for this gal!