The first time I read about smashing cucumbers I was a bit skeptical.

But, my reaction to smashing cucumbers was the same reaction I initially had to the idea of peeling cucumbers, and I’ve since been convinced that both of these activities are a good idea.

First, a little rant about the peeling, because I’m very enthusiastic about it.

Why I love peeled cucumbers

I was first introduced to peeled cucumbers in the 1980s when moms and Girl Guide leaders used to make striped patterns down the sides of cucumbers. This semi-peeled vibe was considered to be kinda fancy because of the way the cukes looked when they were sliced.

Sometime around then, another thing was happening. All of the short, stubby field cucumbers in the grocery stores were being replaced by Long English Cucumbers. This new style of cuke had no seeds and thin skin. So we all ditched the racing stripes and started eating the skin in its entirety.

There’s no going back now

Fast forward to a couple decades later, and I find myself making a salad with my boyfriend who is from Bulgaria. So we’re chopping and chatting and he starts to peel the cucumbers. This isn’t something that I ever did, but apparently nobody in that neck of the woods eats cucumber skin.

And although at first I thought that was silly, I mean – everybody knows that the skin has the most nutrients, it’s full of fibre, and its 100% edible. What was the point of peeling it?

But despite my hesitation, I decided to try it on for size. I peeled my next several cucumbers to see how it felt.

And you know what? It felt good.

So it dawned on me that although it’s good for you, keeping the skin on is like keeping a massive lock on a huge amount of delicate cucumber flavour that I love. 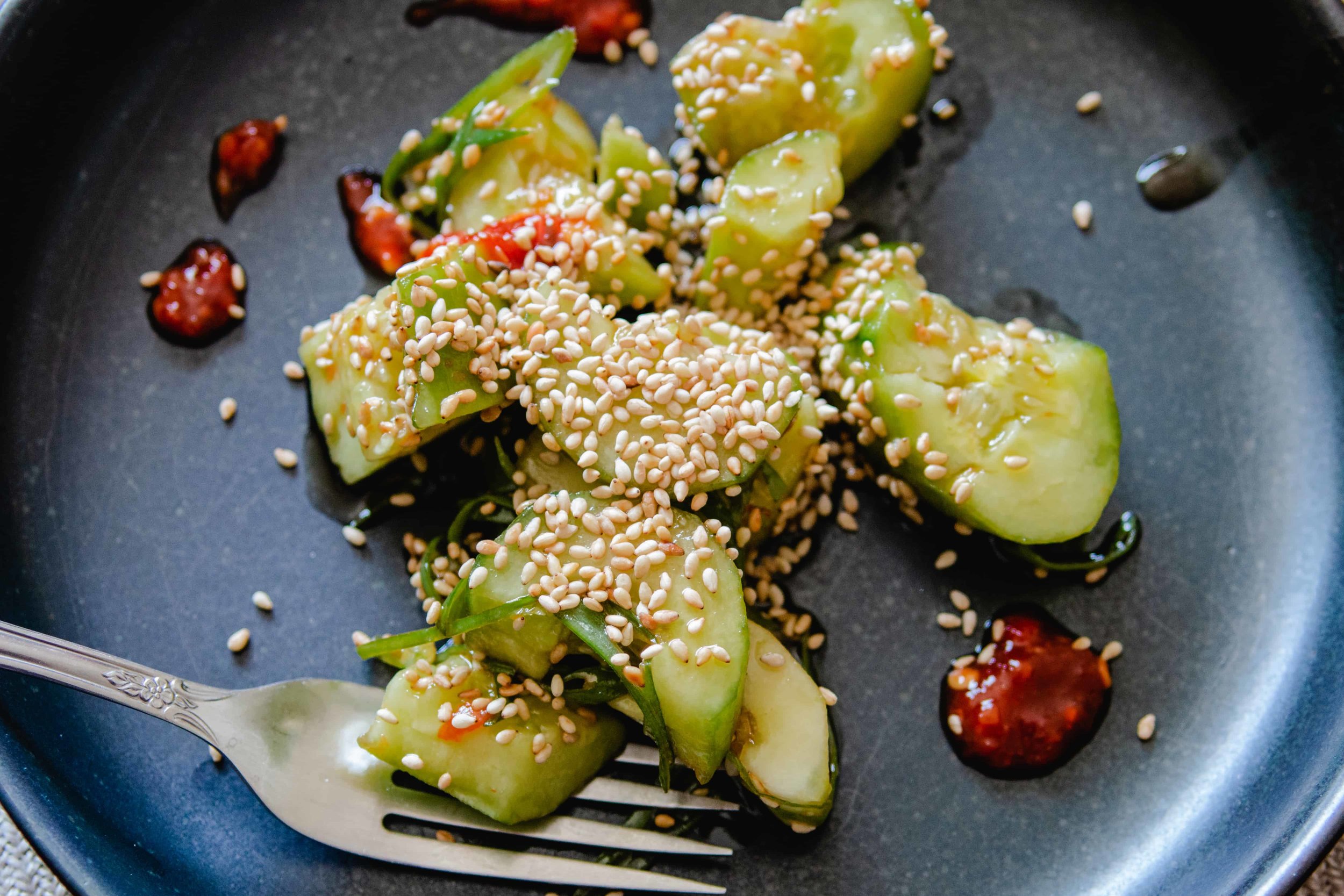 So, I pretty much peel all my cukes now.

Ok, so what does this have to do with smashed cucumber salad? 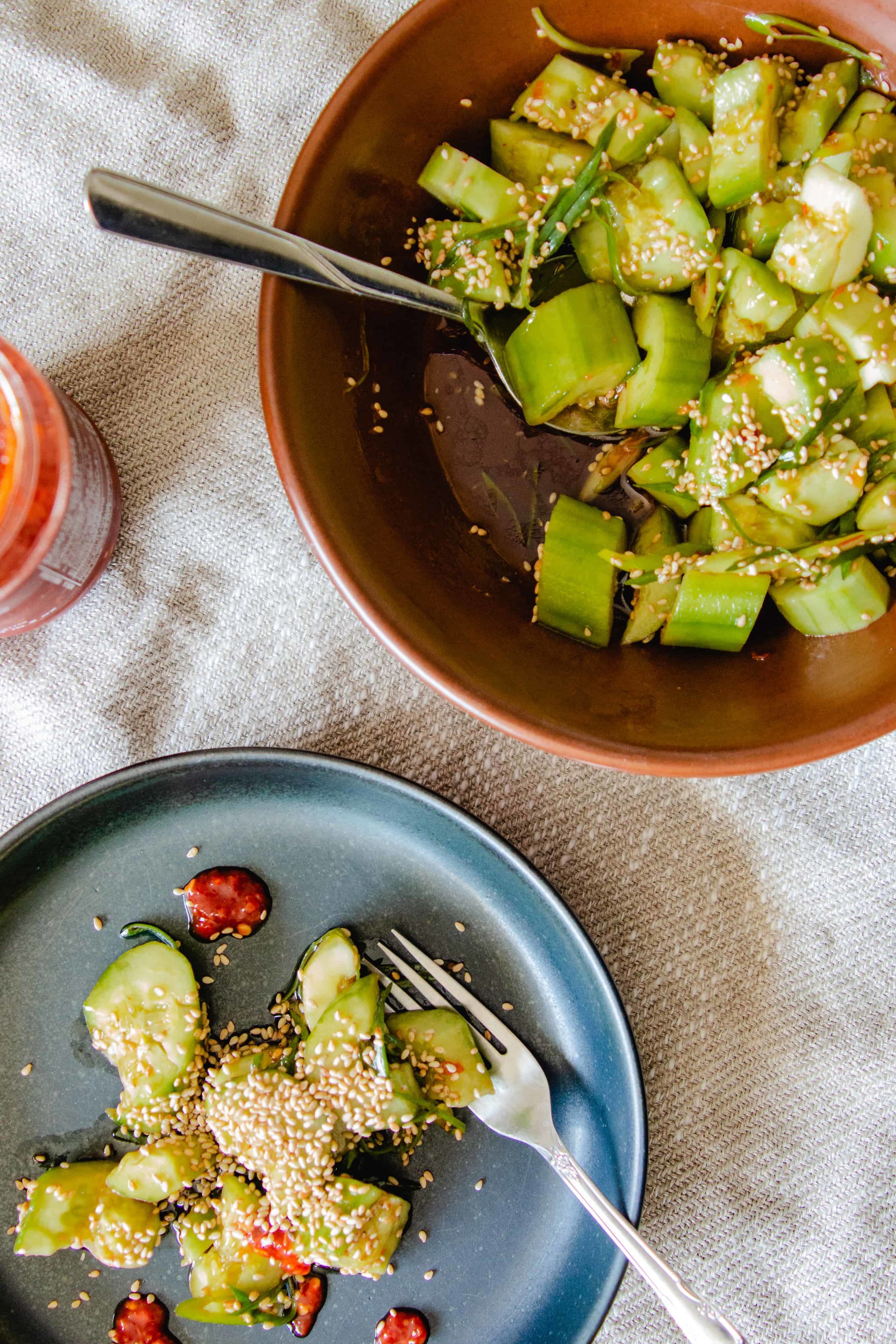 The point of my story is that the same flavour unlocking thing happens when you smash them. Basically you’re busting up all the little flavour cells and releasing their cucumbery-ness to the world. It’s great.

The smashed cucumber salad is a traditional Szechuan thing, but I’m not claiming that this particular version is traditional. It’s just… good.

The basic method for this salad is as follows.

Peel and smash the cukes. Smashing can be done with the side of a heavy knife, the bottom of a heavy pan, or a rolling pin.

Once you’ve peeled and smashed them, cut the cucumbers into rough bite-sized pieces. Place in a colander and sprinkle the cucumber pieces with a pinch of salt, sea salt or kosher salt will do. Toss to coat, and let them drain in the colander set over a large bowl  in the fridge for anywhere from 10 to 30 minutes.

In a small bowl, combine minced garlic, soy sauce, sesame oil and rice vinegar. If you like heat, add some red pepper flakes, sambal oelek, or a sliced red chili. I like fresh cilantro in mine, but sliced green onions are a good alternative. Toss the cucumbers into the dressing and other ingredients and top with a lot of roasted sesame seeds.

Bring this smashed cucumber salad to a potluck or serve at home among other side dishes like steamed rice, noodles, or sweet chili green beans. It goes really well with grilled fish or chicken.

Here’s the video so you can make it with me! You can grab the complete recipe from down below.