Wondering what the deal is with this dry brine business you’ve been hearing about lately? This one’s for you.

If you want to make the best roast chicken you’ve ever had, it would behoove you to consider dry brining it first. This poultry preparation technique is showing up on holiday tables everywhere, and for good reason.

I try to ignore food trends for the most part, but this is one of the few (along with the reverse sear and avocado on everything) that I can really get behind. There are lots of things to love about the dry brine method, especially when applying it to poultry. Dry brining will seriously improve your chances of making the best roast chicken ever. 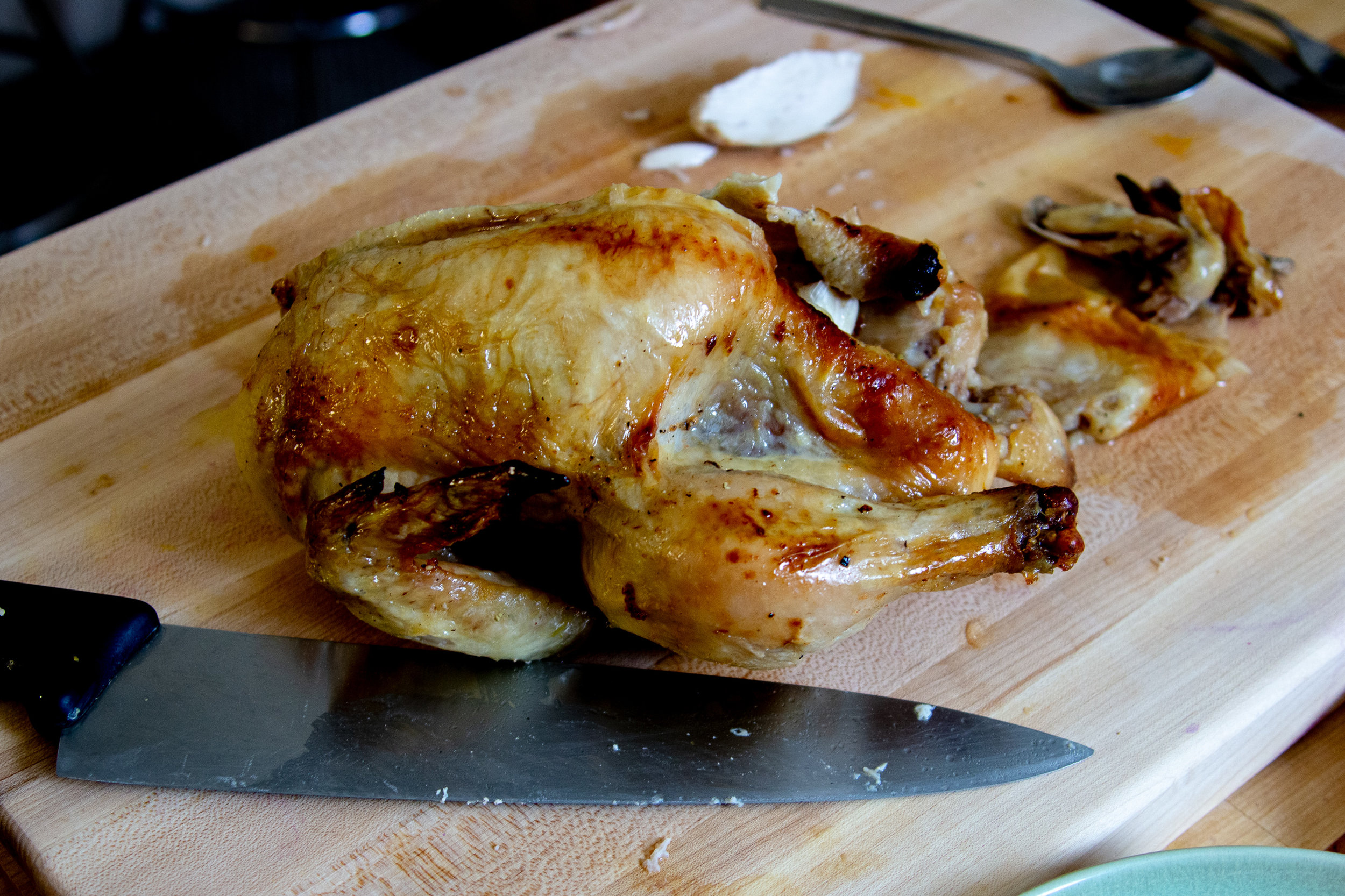 The components of a dry brine can be as simple as straight up salt. It can also be a blend of salt and spices, with the option to include sugar as well. When thinking about which salt to use,  Kosher or coarse salt is better than table salt or sea salt, as it sticks to the skin better and is less “salty” than other salts, which means you can really lay it on with less risk of ruining the whole chicken.

The process for dry brining chicken involves rubbing the little guy with plenty of salt, or seasoning mixture of your choice, then leaving it on a rack in the fridge for up to 24 hours. For an average 1-2 KG chicken, I’d say 12-24 hours will work well.

If you’re into learning more about the science behind brining, check out this doozy from Serious Eats.

What went into this particular dry brine mix?

I ended up experimenting a bit and using fresh garlic instead of garlic powder which I was planning to use in the seasoning mix. It turned out pretty well, but using powder would have definitely made for a crispier skin. 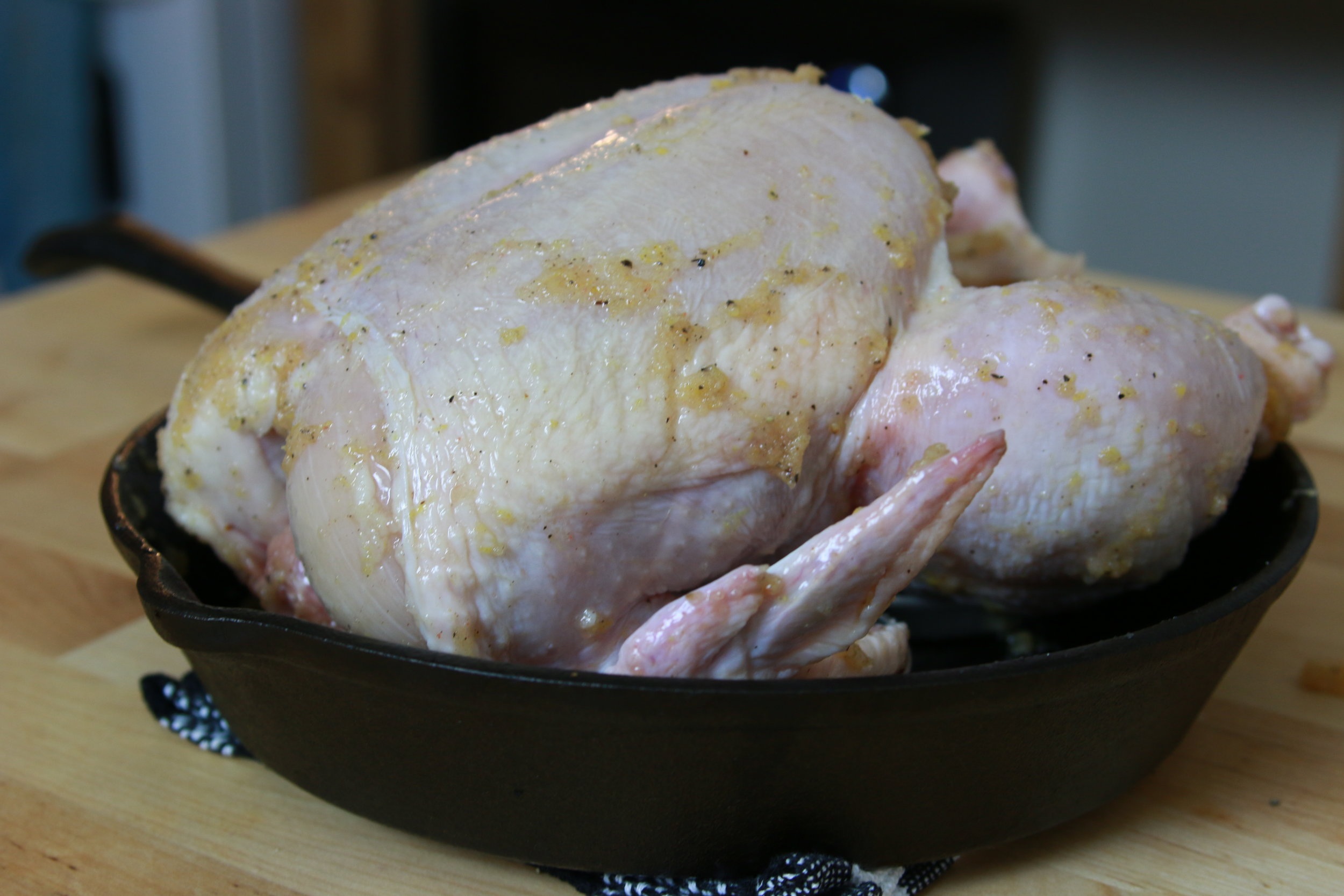 It definitely turned out like more of a ‘paste’ than a rub, but it dried up pretty well in the fridge and tasted like heaven.

The dry brine mixture I used here was:

I stuck the chicken on a rack over a pan in the fridge (and by rack, I mean upside down jar rings) for about 24 hours, then pulled it out, brushed off the excess salt with a paper towel, doused it in olive oil and threw it into a cast iron pan over some carrots, onions, & celery and roasted it at 350 degrees for 1h 30 ( it was a 1.9kg chicken).

If I wanted to absolutely ensure the crispiest skin, I would cook it on a rack over a wide roasting pan and ditch the chunks of veggies. They create steam in the oven which interferes with browning. I like what the veggies give to the gravy though, so decide what your priorities are and run with it!

Whatever you do, make sure NOT to overcook your chicken. That means using a thin probe thermometer and cooking only until the deepest meat between the leg and thigh is 165. You can also tell when it’s done when the juices run clear and the legs feel like they could just wobble right out of their sockets.

It’s also important to rest any meat for about half the cooking time. So, if it takes 1 hour to roast, it needs half an hour to rest. You’re right, it won’t be piping hot after half an hour, but as long as everything else is warm (including the plates, and especially the gravy) you’ll be fine.

Speaking of gravy, check out this video where i made some delicious stout gravy from the chicken!