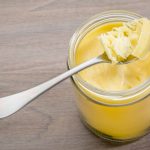 For a week or two now there’s been a 500ml carton of whipping cream staring back at me every time I open the fridge. I don’t remember why I bought it. I probably had a grandiose baking idea one day then ran out of time and/or energy before getting around to it. After arriving home after a few days out of town, I noticed that it my heavy cream was about to expire. So, I did what anybody would do. I whipped up some homemade ghee.

The joy of using stuff up

Partly because I don’t like wasting money, and partly because I get a lot of satisfaction from rescuing perfectly useable stuff. That being said, I am guilty of throwing out the odd scrap when I just don’t feel like dealing with it.

In these moments of weakness, I end up taking myself out for a whole new exciting grocery shopping trip. I make big exciting plans for the upcoming week of food, and it gives me a nice boost of ‘grocery shopping dopamine.’

But I’ve decided that groceries are like a relationship that only lasts a week. The anticipation is major. Walking through the aisles, making decisions, checking prices… it’s exciting.

Then you bring it all home, load up the cupboards, and if you’re like me–you immediately build the snack of your dreams.

A few days later, the honeymoon is over.

The celery starts to wilt–no longer begging to be transformed into ants on a log).

There’s only 1 egg left (and one scrambled egg is the saddest thing I can imagine).

I could go on.

So you get creative.

Your snacks start to become make-shift versions of your original cravings.

I mean, A single perfectly poached egg will often do the trick, but the feeling you get when you open the fridge is less dreamy than it once was.

The relationship with your groceries ends due to lack of enthusiasm and a pining for something new.

Back to that expired cream

So I had this whipping cream and I really didn’t want to throw it out. So to extend its life, I decided to make ghee. Ghee is the Indian version of clarified butter, which from my understanding, cooks longer than French clarified butter. Unlike the French version, ghee cooks for a long time–allowing the milk solids to brown, and the water in the butter to evaporate.

The moisture in food is what causes spoilage (which is why dry bread crumbs don’t get moldy and why butter lasts longer than cream). So, with the water from the butter evaporated away, your homemade ghee should last for a few months in the fridge, or a few weeks on the counter.

Plus, browning the milk solids make it really nutty and rich. It’s also really easy and very satisfying. Ghee has a really high smoke point, so it is perfect to cook with on high heat.

How To Use Homemade Ghee

Because ghee handles high heat so well, it’s great for applications like frying fish, searing meat, and sizzling up with spices. Ghee also works really well in baking–like in these oatmeal raisin cookies, and is great to brush over flatbreads for some extra flavour and moisture. Use Ghee anytime you want butteriness, but don’t want to use whole butter because of the risk of burning.

It’s truly the best of both worlds!

So I hope next time you find yourself with some old whipping cream, you’ll whip up this homemade ghee. It really is easy and so so delicious.

Oh, and if you’ve truly run out of pickles, I’m sorry. Hopefully you have some random veggies in the crisper drawer and you can make my quick pickled vegetables!

Homemade ghee is so easy to do! This method explains how to make it from heavy cream.