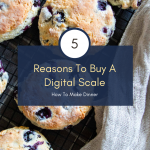 Switching from cups to grams is the best way to instantly become a better baker. I am such a big proponent of this method. There are so many reasons to buy a digital scale, but I wanted to sum it up with just the main five.

The old days of cup measurements

I learned to bake using measuring cups. We used Pyrex ones for liquids, and stackable plastic ones for dry ingredients. It has always bothered me when a recipe calls for 1 cup plus two tablespoons of flour. What the hell is that about? Who has time for this ‘plus two tablespoons’ madness? I used to think it was the fault of bad recipe writers. I later learned that this annoying instruction is what happens when you convert a weight into a dry cup measurement. It’s bad.

My first baking job was at a cafe where I was making decent sized batches of muffins, cakes, croissants, lemon squares etc. We made everything from scratch which was awesome, but we used measuring cups for ALL OF IT! I’m talking batches of muffin mix that used 16 cups of flour. I would always get mad at my coworkers for talking to me when I was on like, the 9th cup, because I didn’t want to lose count.

Now that I’m older and wiser, I realize how insane that was. If I could turn back time I would have ran out and bought a digital scale from the nearby hardware store.

North America, lets get with the program

European and British bakers, as well as bread bakers worldwide have been weighing their ingredients forever. The problem happens when American and Canadian bakers bring recipes over from Europe and translate them to our cumbersome measuring methods. That’s when we run into this 1 cup plus 2 Tbsp problem.

The cup measure needs to go. It’s time has come to ditch the ol’ scoop and level.

Here’s the list: 5 reasons to buy a digital scale.

When you start weighing your ingredients instead of measuring them, you start to understand that just one gram is actually a fair bit of volume. How many times have you gotten to a step in the recipe that calls for “3/4C packed light brown sugar?” How do you know how hard to pack it? 1 cup can turn into as little as 1/2 cup if you give it enough muscle. Is that what they mean? I’ve seen people “aerate” flour by scooping and dropping it a few times with the measuring cup before actually measuring it. Is it aerated flour that the recipe wants? There are too many variables with this system. Weighing removes all of these variables.

2. It’s faster, and there are less dishes to wash

I can get into washing dishes from time to time, especially if I’m listening to a good podcast. But for the most part, I don’t love washing dishes. Consider a cake that uses 3/4 cups of honey, 1/2 cup melted butter, and 1/3 cup molasses. Suddenly you have three dirty measuring cups – two of which you were supposed to oil first.

Oiling measuring cups is a trick that ‘cup measurers’ tell you to do. But getting the sticky stuff out of the cup isn’t the only issue here. You also have a lot of sticky stuff on your counters, your spatulas, and how do you know how much cold butter to melt in the first place? Weighing your sticky and awkward ingredients solves all of these problems. – Read to the end for my favourite ‘sticky ingredient’ weighing strategy!

3. Sifting is no big deal anymore

I’m a fairly lazy baker. I rush things, I’m impatient, and I’m guilty of cutting the odd corner to save time. Sifting used to be one of those corners that I occasionally (usually) cut when baking. I always knew sifting had it’s merits – It gets rid of lumps, aerates the flour, catches any bugs or other weird foreign objects that might have gotten into the flour bucket. Still, I’m guilty of skipping this step many times.

Since I started weighing my ingredients, I’ve changed my tune about sifting. Since I’m saving so much time without fussing with cups, it feels like the easiest thing ever to bust out my sieve and stick it directly on the bowl I’m weighing into.

My setup:  Scale, Bowl, Sieve. That’s it. Everything just gets thrown in there.

Bonus tip – I NEVER wash my sieve in water. I just tap it out and put it back in the cupboard. If cocoa powder is involved, I’ll sift that first, before the flour etc, so it kinda gets “cleaned” out by the flour. I sift everything now, and I sleep better at night because of it.

4. Your results will be better and more consistent.

I really got into weighing my ingredients in 2013 when I went to work at a farm shop in rural Scotland. There we made big batches of classic loaves, cakes & pies every day. The consistency of these baked goods were so spot on, that we would compete for who got the most volume on their carrot cake for example, and the difference from batch to batch was imperceptible. We weighed everything at that shop, and everything was delicious! That shop provided the inspiration for the best scone recipe I know.

Truth be told, I didn’t used to like baking at all. It wasn’t until the the farm shop experience that I turned the corner and started loving it. I had been a measuring cup hater all along,  I just didn’t know it. I used to think scales were a pain, an investment, an extra step. Now I see how baking with a scale is like adding one step to alleviate 10 other more annoying steps.

Baking can be so fun. If it doesn’t bring joy to both the bakers and the eaters, what’s the point in doing it? When you bake something that turns out well, it makes you feel good. Having less dishes to wash at the end is a luxurious bonus that brings you a few steps closer to eating cake with your friends.

A digital scale costs $20. The batteries will need to be replaced every year or two but other than that, a scale is a tiny investment that will revolutionize the way you bake.

Now, all the sticky stuff is where it needs to be! That is, in the pot you’re going to melt it in. Of course, now that you’ve got your scale out, you might as well use it to sift and weigh all your dry stuff too.

For more conversions: King Arthur Flour has put together a comprehensive guide. Find it here.

Got your own opinions about measuring styles? Do you need any more reasons to buy a digital scale? Let’s talk about it! Comment here or join me on Instagram @howtomakedinner. Thanks for reading!