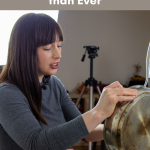 There are two types of people in the world. Cooking show people, and everybody else. This is my working theory anyway.

How do you know if you are a cooking show person?

Well, If you are inclined to watch Chopped, Iron Chef, or anything with Guy Fieri, you are probably not a cooking show person. You are probably a competitive sport person who also enjoys burgers.

Likewise, if you only like one particular cooking show, or maybe two – you are probably not a cooking show person. You most likely tune into these one or two shows because you like the way someone looks or you get a kick out of their cute accent. In these cases, it’s not actually about the cooking show; it’s only about the personality.

Not that there’s anything wrong with that.

Cooking show people tend to gravitate toward the types of programming that really only focus on cooking. These people favour the Barefoot Contessas and Nigel Slaters of the world. They probably grew up watching Julia, The Galloping Gourmet, and Sara Moulton too. Indeed, these shows are also very personality-focused, but there is far less flash and quirk, and zero competitiveness, which leaves non-cooking show people with a lot to be desired.

As you might have guessed, I am a cooking show person.

Nothing brings me more pure, joyful comfort in life than curling up with a good cooking show.

Since I was a little kid, I have been completely enamoured with watching people make food. I’d talk to my friends about it and they’d say things like “I can’t watch those shows, they just make me hungry.” Or, “Oh, I ONLY like Chopped.”

I didn’t relate with these statements at all. Chopped is just silly, and I never get hungry watching cooking shows. It’s just never been about that for me. Which is weird, because I’m hungry pretty much all the time. It’s like cooking shows activate an entirely different set of synapses in my brain.

There was once a time in my life when I thought I was the only one who felt this way about cooking shows. I thought nobody else understood or felt what I felt. The internet has changed that though. It’s very cool the way social media has enabled like-minded people to connect over their super-niche interests.

I think it’s because I started so young that watching cooking shows has never felt like a learning experience. I remember the first day of culinary school when we were assigned to go to the library and bring home a box set of Jacques Pepin VHS tapes. These tapes included the chicken deboning video AND the omelette video. (If you’re a true cooking show person you’ll know the ones I’m talking about.) I knew then and there that this was my calling. I’m being assigned to go home and watch these? Heaven.

Watching cooking shows for me has always felt like pure, soothing melodies being gently whispered into my ears while relaxing visuals soothe my eyeballs.

I mean, sure, I usually have to spend some time getting to know a host before I really click with them. The first time I saw the Barefoot Contessa I was like – who is this lady? She laughs when things aren’t even funny and she’s so rich and buys too many cut flowers. I didn’t relate with her lifestyle, but after some time I really softened to Ina. Eventually, I got to the point of developing a true affinity for her show. Back when I had a DVR and I’d see multiple episodes of her show queued up for me to watch, it was like Christmas morning. Reruns and all.

Moving to Britain was a great thing for me – the BBC introduced me to Nigel Slater and the Great British Bake Off. Man, that was like winning the jackpot. These are the kinds of shows that lovingly welcome us into the lives of the nice people presenting them, and it feels so good.

Cooking shows have changed a lot in recent years. The Food Network is barely recognizable to the one I used to love. Besides not having cable anymore, I haven’t had much interest in Food Network, ever since the sporty competition shows took over. Triple D isn’t comforting. Chopped isn’t comforting. They’re competitive and flashy and just not for me.

With the Food Network of North America reverting to the ranking-heavy Triple-D & Chopped-style shows, a cooking show devotee needs to look elsewhere. YouTube has emerged as the absolute best place to find what I’m looking for. It’s where my people are.

When I first stumbled upon Bon Appetit several years ago, it was as if I’d found home. The hosts are quirky, but they deliver their quirk in a refreshingly understated way, while staying very relatable and just plain fun to hang out with.

Note: Since writing this article, it has become known that Bon Appetit has been a toxic workplace for their BIPOC staffers. I have stopped supporting the channel with my viewership for the time being. I look forward to hearing about changes they will make to provide an inclusive and equal work environment.

Since then I’ve strayed into all kinds of genres: trendy channels like New York Times Cooking, vegan channels like Pick Up Limes, and unboxing/cook with me style channels like the ultra-charming What’s for Tea? (one of my favourites). I’ve ventured into the stylish minimalism channels (shoutout to Jenny and David Mustard), the zero-waste channels, and several other rabbit holes, and found that there really is something for everyone.

We need this now.

At the time of writing this, the Coronavirus has converted us all into homebodies. We can’t go out. We can’t hug, we can’t go to restaurants or bars, and going to the grocery store is anxiety inducing. With more time on our hands the cooking and baking projects have certainly ramped up (shoutout to all the food bloggers for providing us unlimited recipes on demand), but beyond that – more of us are turning to the digital world for connection and comfort. We are craving the ability to go over to a friend’s house, pull up a spot at their kitchen counter, and hang out with them. The kitchen is always the centre of the party, and that has only become more apparent since self-isolation.

So whether you are a cooking show person or not, you’ve got to admit, they’re kinda helping us out right now.

Now is a time when we want to hang out with people in kitchens more than ever. Cooking shows allow us to do that. And with platforms like YouTube, there is even less flashy extra stuff getting between us and our beloved hosts. A prime example – The Bon Appetit test kitchen team have all been provided with tripods to film themselves cooking from their homes. They’re ahead of the (hopefully flattening) curve! And I’m on here for it.

One of my deepest desires is to create a kitchen hang-out environment that makes you feel at home. A place to have a good chuckle and maybe even learn a thing or two. I attempt this every week on YouTube–thanks to the generous help of my incredible partner/cameraman/director/editor Hristo. If you decide to join me, I hope I provide some connection and comfort to ease you through the day.

And if you’re just looking for recipes, I’ve got some of those too.