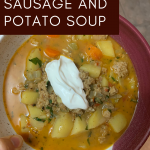 If you’re looking for a big bowl of something hearty and cozy to curl up with this weekend, this Creamy Sausage and Potato Soup is just the thing.

Hearty sausage, homestyle veggies, and creamy broth come together to deliver the ultimate hug-in-a-bowl scenario and it’s everything I want in a cold-weather dinner.

What you’ll need to make this recipe

Sausage: Any kind of sausage will do here! But it should be raw (not pre-cooked) because you’re going to crumble it in. I love using Italian sausage for this recipe.

Potatoes: Waxy yellow potatoes are best, as they hold their shape as they cook.

Celery: A must-have for most soups. This time we’re chopping them on the chunky side.

Onions: Because you’ve gotta have onions

Garlic: For that background flavour

Plum tomatoes: I usually use canned tomatoes, but fresh will work too.

Thyme: I like using fresh thyme, but dried will work too. Just use less of it.

Stock: Chicken or veggie. Whatever you’ve got!

Parsley: For a bright green finish

Black pepper: The pepper flavour is very nice in this soup

How to make this Creamy Sausage and Potato Soup

This soup is really easy to make and you only need one pot!

What goes well with this Creamy Sausage and Potato Soup Recipe?

I personally don’t need anything with this soup. It’s so hearty! But if you really wanted something on the side, I’d recommend some nice garlic bread.

Allow the sausage soup to cool completely before transferring it to a food-safe container and putting it in the fridge.

This soup keeps very well in the fridge for up to 4 days. If you’d like to freeze it, I’d recommend leaving the cream out and adding it during the reheating process instead.

Can this Sausage and Potato Soup be made Vegan?

Yes! Use vegan sausages and plant-based cooking cream and you’ve got a truly satisfying vegan dinner. Feed it to meat-eaters and they probably won’t know the difference.

Can I use dried thyme instead of fresh?

For sure. Just use about 1 teaspoon at most. That stuff is strong! 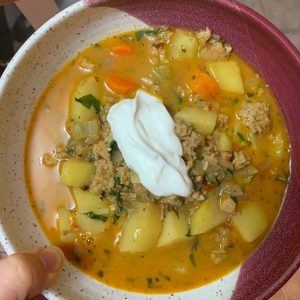