There’s something about zucchini boats that just kinda ticks every box for me. They’re so satisfying, while also being pretty easy on the ol’ waistline. That is if you resist dumping a whole block of cheese on top.

These stuffed zucchini boats are loaded with a turkey taco inspired mixture of black beans and corn, and they only take about 20 minutes to make.

Looking for the video? Scroll your way down to the bottom, just below the recipe. 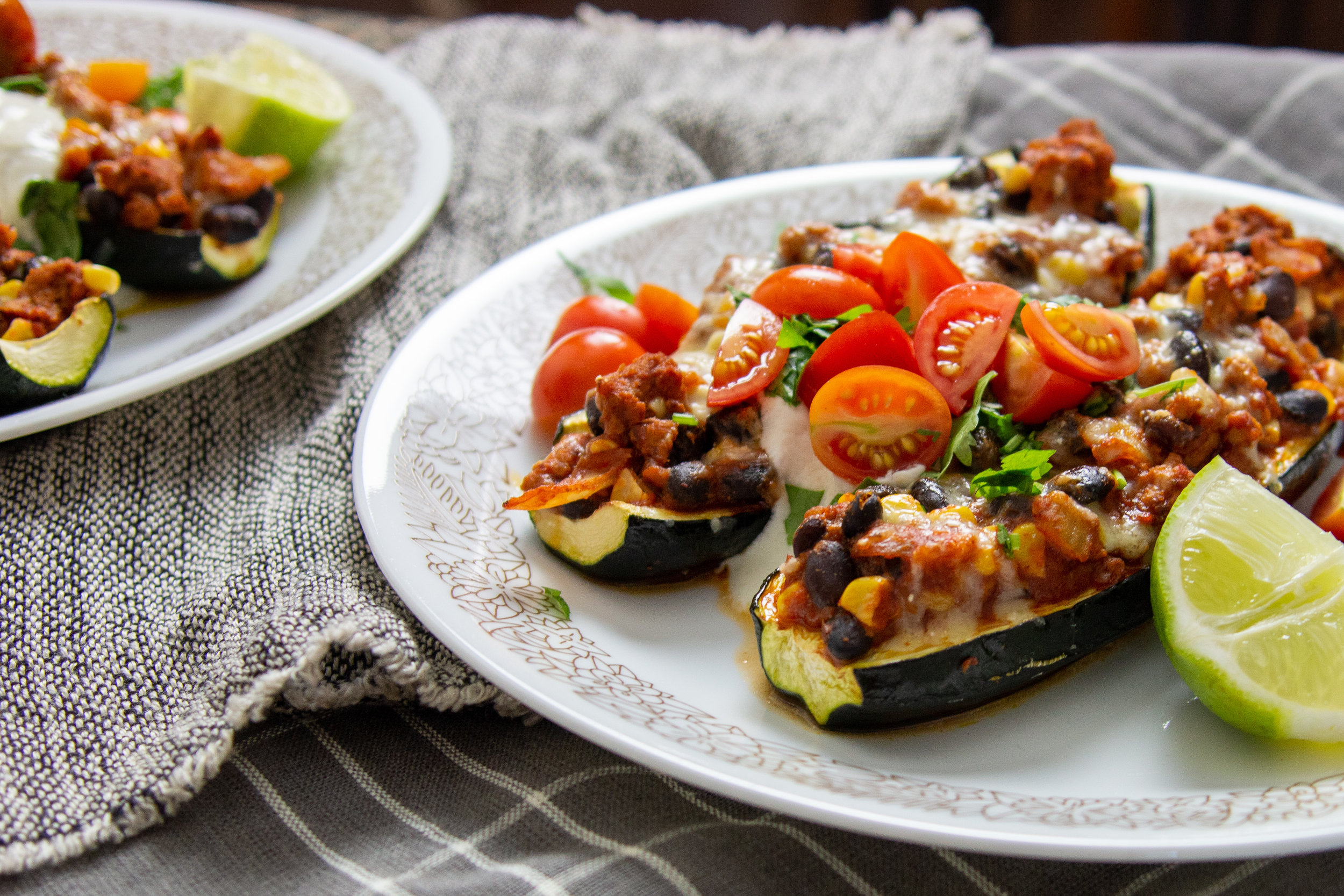 That’s right. It’s a healthy dinner in 20 minutes! These turkey taco zucchini boats make such a good low carb easy meal, you’ll be making them every week. Plus, the recipe for the filling makes enough to eat with rice, over salad, or just straight up in a bowl. The turkey taco leftovers are ideal for a desk lunch and dinners throughout the week.

I first discovered the joys of zucc boats when I was a teenager. I was friends with some organic farmers and they grew zucchini the size of baseball bats! We made these all the time and called them “zuccanoes,”

The ever versatile zucchini

Believe it or not, zucc canoe is not a very often searched keyword, so for the purposes of this article we’re sticking with boats.

I LOVE zucchini, and i’m so glad they’re finally getting their moment in the limelight. They’re cheap, versatile, and available year round. Their recent surge in popularity is mostly because they make a great substitute for starchy foods like pasta. The spiralizing craze is still well and good for the most part!

I love them roasted, grilled, raw, pretty much any way I can get them. If you haven’t tried my grilled zucchini salad yet I’d recommend you give it a go! It’s such a satisfying little number.

Ok back to the boats.

Preheat oven to 400 degrees, then cut two zucchini in half lengthwise and scoop out some of the flesh. All you want here is a channel to put the meat mixture when it’s done.

Rub the zucchinis with oil, sprinkle with salt and place on a baking sheet in a crankin hot oven (400 degrees or even 450) and bake for about 20 minutes. The zucc’s will be softened slightly, juicy and lightly browned. 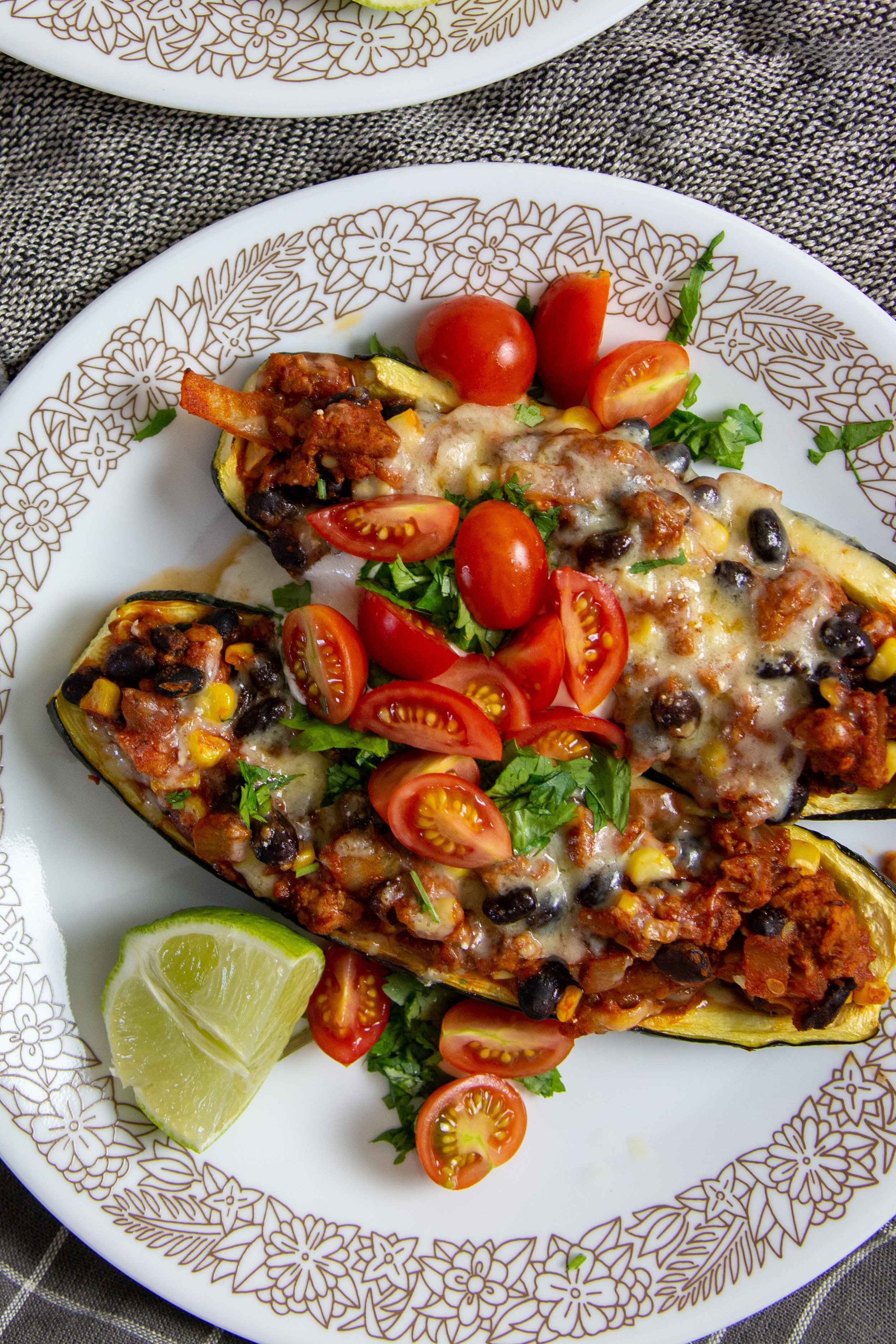 While the zucchini halves are cooking, you can make the ground turkey filling. If you prefer, you can do this exact same thing with extra lean ground beef instead.

Saute a small onion in some olive oil in a large skillet with a heavy bottom. When the onion is softened, add the ground turkey. Cook and break up the turkey until the turkey is mostly no longer pink, and you have some browned bits on the bottom of the pan.

Throw in your herbs and spices (cumin, garlic powder, dried oregano, chili powder – basically my version of homemade taco seasoning), the black beans, corn, and a can of tomato paste. If you don’t have tomato paste but you DO have marinara sauce or other pasta sauce, use about 200ml, or just shy of a cup. Simmer for 5 or so minutes, adding a splash of water if you need to.

Now for the fun part

At this point it’s important to taste for seasoning. You might need salt and pepper.

When the zucchini and the mixture are both cooked and ready to go, scoop the meat mixture into the zucchinis, top with cheese, and place on a tray or baking dish under the broiler for 5 minutes or so until the cheese is melted.

Don’t hold back on the toppings either! These boats can handle anything you’d normally throw on a taco. Avocado, sour cream, salsa, fresh cilantro, and of course, HOT SAUCE.

Serve taco stuffed zucchini boats at your next taco night. Your family is going to love them!

A few ideas for the leftovers – Try stuffing them into tortillas, enjoying them over rice, making a quick taco salad or topping a baked potato or baked sweet potato.

Hey! I'm Paula. I'm a former chef turned blogger and YouTuber. I make videos and non-fussy recipes for balanced, non-restrictive eating. I hope to help you streamline your grocery shopping and cooking process so you can be a more confident and efficient dinner maker.