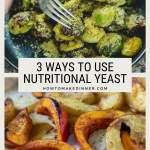 If you have yet to explore all the wonderful ways to use nutritional yeast, read on. You’re about to dive in to a delicious new world!

You’ve probably never heard me use the term ‘superfood’ before. I wholeheartedly subscribe to the belief that all food is super. But if there was ever a food that was extra super, it would be nutritional yeast. I love this stuff so much. It’s loaded with vitamins and minerals (it even has some protein in it), and it makes everything delicious.

What is nutritional yeast?

Nutritional yeast is an inactive yeast that grows on molasses. By inactive, I mean that it isn’t alive. It doesn’t, for example, have the ability to make bread rise. It’s basically dead weight. Which is good news for us, because it means it won’t do anything weird to our bodies–like throw off our yeast/bacteria balance. These things are important.

Where to buy nutritional yeast

If you go looking for nutritional yeast in the health food store you might be bombarded with an entire wall of different varieties. There are tons of similar inactive yeasts on the market like brewers yeast, and torula yeast to name a few. But the most common one–and the one we’re talking about today, goes by the name of “nutritional yeast flakes” or “engevita yeast flakes.”

If you’re shopping at a normal grocery store, you’ll likely find nutritional yeast in either the bulk section or the herbs and spices section. If your store annoyingly has a “natural foods” section (my annoyance for this section is long-winded and will probably warrant another blog post one day), you will likely find it there.  As with most things, you can also buy it online!

Nutritional yeast has been a popular topping for popcorn for a long time, especially in the nutrition and health nut communities. Lately, I’ve seen it popping up in more mainstream settings. Cool restaurants are using it, cool foodie magazines are talking about it, and it’s starting to become more readily available.  I’ve also noticed some commercialized applications for this stuff going under the nickname “nooch” which I think is pretty cute since “nutritional yeast” sounds super clinical and pretty unappetizing.

Now let’s get into how to use nooch in some really delicious ways at home.

How to use nutritional yeast (3 wonderful ways)

If you have something creamy and you want to make it more creamy, nutritional yeast is a great way to achieve that. Things like broccoli soup, cauliflower soup, mashed potatoes, risotto, and creamy pasta. It has an amazing way of becoming super cheesy and smooth when mixed into anything warm. You’ll often notice it in tons of vegan recipes for this reason. Vegan mac and cheese, caulifreddo, it’s perfect for that stuff. On top of the rich nutty flavour, it has a beautiful earthy yellow colour which makes it extra appetizing.

Scroll to the end of this post for a ridiculously easy “nooch noodles” recipe. It is comparable to my beloved marmite spaghetti, but slightly more sophisticated. It’s amazing.

Nutritional yeast is such an amazing addition to literally any roasted vegetable. Whether you’re roasting squash, potato wedges, Brussels sprouts or broccoli, sprinkle it with tons of this stuff when it comes out of the oven. It’s so freaking delicious.

Other veggies to try it on:

You can find a million different variations of this dressing online, but here’s one of the basic versions:

*Just blend the garlic in with the vinegar, soy sauce and nooch, then slowly drizzle in the oil. If the dressing is too thick or too strong in flavour, add cold water to taste.

I’m not totally sure where this concept for a dressing got its start, but two similar versions were printed around the same time in two separate cookbooks I happened to own. Whitewater cooks, and Hollyhock Cooks. Since then, I’ve seen iterations of the same dressing all over the place. Recently I’ve seen a company making a store-bought version of this dressing and selling it in bottles for almost $10.

No need to bust out the big bucks though. Making this creamy dressing yourself is really cheap and very easy. Plus, it’ll keep in your fridge for at least a week or two.

You won’t even believe how good this dressing is, you’ll literally want to dump it on everything.

Scroll down for a recipe for my “Nooch Noodles.” It’s yet another wonderful way to use this delicious stuff, and it kinda tastes like boxed mac & cheese. I personally love it, especially curled up with a good book or a movie.

Is Nutritional yeast the same thing as brewer’s yeast?

Brewer’s yeast is naturally quite bitter, but a de-bittered version can be used in cooking in similar ways to nutritional yeast.

What’s the difference between fortified and unfortified nutritional yeast?

If you’re looking for more salad dressing tricks and tips, feel free to grab my downloadable guide. It gives you a solid salad dressing framework to start with, and tons of combos to get you inspired.

And if you’ve made all these things and you still have a bunch of it kicking around in your cupboards, it is still one of the best things you can do for your popcorn. And if you ever run out of ideas on ways to use this wonderful stuff, shoot me a message and I’ll help you solve this very delicious problem. 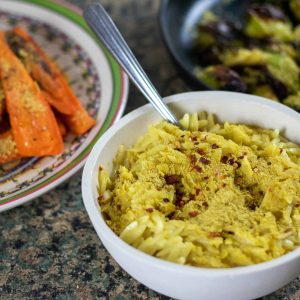